Let me just start by saying that I’m a little jaded when it comes to Comic Con. I’ve been going down there for 10 years now, so all the nutty fanfare and the line-waiting doesn’t really have the same draw that it might have had in the past. I’d rather enjoy my time there, snap a few pictures, grab some cheap comics, and chat with some artists and creators rather than set up a tent on the lawn so I can see Dr. Who walk out onto the stage two days from now. But that’s just me. I understand that some folks live to see their idols wave to them in crowded auditoriums or that standing in a three hour line to purchase a plush doll of Yoda is probably the most important event at the con. I, personally, would much rather see the sights and hear the sounds than sit in the grass for what feels like a fortnight. And I feel that way because there’s just so much to do at Comic Con that spending 12-16 hours in a line feels like a waste of time.

All predilections aside, there are some very important things one must take into account regardless of one’s con-going preferences if one expects to exit said convention with one’s sanity intact! These truths hold true for anyone, regardless of whether you’re unrolling your tent in the Hall H line or if you’re simply wandering through the hall, taking in the scene. 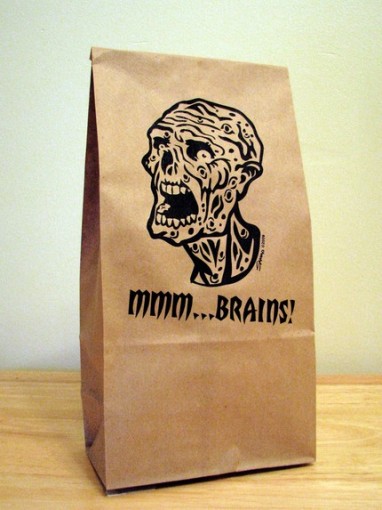 1. Bring your own food

Comic Con food is two things. One, it’s shitty. Two, it’s expensive as hell. Last year, in a desperate hunger I purchased a water bottle and a hot dog from a vendor. It cost me $12.00. Let me reiterate. One bottle of water. One hot dog. Twelve bucks. Sorry, but I will NOT be making that mistake again.

My recommendation: Pack sandwiches that won’t go bad in the heat or get too smushed under all the cool stuff you buy. Peanut butter sandwiches are the best. Also grab some protein bars or energy bars to snack on in between meals. For beverages, I’d highly recommend bringing a bottle with a water filter in it. There are lots of different water fountains all around the convention, but the water at the San Diego Comic Con tastes like spit, so a filter is highly recommended (plus you’re helping the environment by saving plastics!). 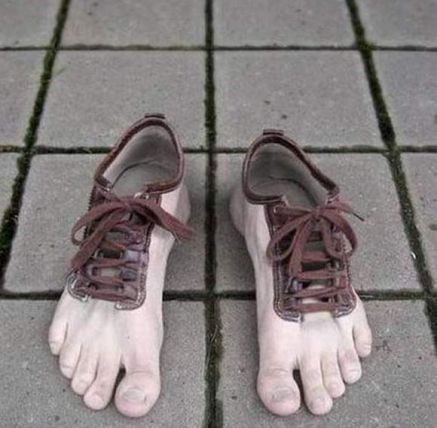 I can’t stress this one enough. I’ve made the mistake (several times) of wearing shoes that look good. But shoes that look good weren’t designed to be underfoot for an excess of 40 miles in four days (which is what my pedometer clocked last Comic Con).

My recommendation: Unless you’re part of a fashion show, bring shoes that can stand the stress of not only walking long distances, but also standing in lines. Yes, STANDING in lines. It’s apparently a fire hazard to sit on the ground in some lines and the security folks will demand you stand up or leave the line. It sucks, so plan for it.

One of my favorite things about Comic Con is the fact that it’s become so big that it’s begun leaking awesome exhibits out into the areas surrounding the convention center. These outdoor attractions, along with the ample cosplayers and pop up events, give con goers a reason to head out into the sunny San Diego streets. But this is where you have to be careful. Many of the events have lines in which you’ll spend between 15 minutes to 2 hours standing around in the direct sun – which is a recipe for crispy disaster!

My recommendation: If you’re as fair skinned as I am, a pocket sized tube of sun screen (which you can find at any grocery store or pharmacy for two bucks) is what you should add to your supplies. They’re small, light, sturdy, and will make the sunshine all the more welcome. 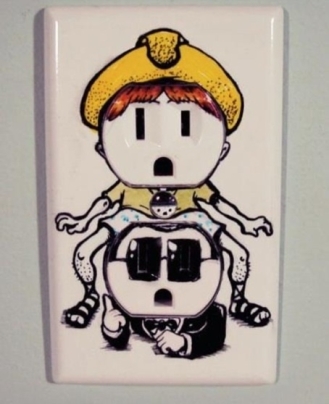 I think it goes without saying that there’s a LOT to do at Comic Con. From unexpected celebrity sightings, to cosplayer group photos, to big panel announcements, photo ops and tweets or facebook status updates abound. You’ll spend a good deal on your telephones and tablets, especially if you’re hanging out in lines. And those little batteries can only take so much abuse…

My recommendation: Well, I have a few recommendations. My first choice would be to bring a portable battery charger, which you can pick up at any Best Buy or on Amazon for a modest price. If the portable chargers are outside the price range or if it’s too late to grab one, then the next best thing is to locate an out of the way outlet and, when your legs can’t support your drooping frame any longer, seek refuge beside the outlet. Having lunch next to an outlet is also a splendid idea. Kill two birds with one stone, as it were. 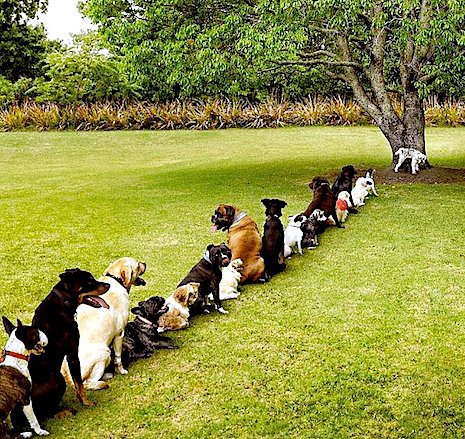 5. Make the best of the lines

Lines at Comic Con have, unfortunately, become unavoidable. You wait in line for free shit, for panel openings, to buy toys, to buy comics, to get autographs, for photo ops. Everywhere you look, a different line will be within eyesight. This I guarantee you. Now, you can do what some frustrated, exhausted people do and stand in line, face buried in your phone, complaining about how long the Walking Dead photo op line is on Twitter. Or you can talk to the people around you who are also in line.

My recommendation: You’re at one of the largest gatherings of nerds, geeks, and uberfans in the world. Chances are, if you’re at Comic Con and you’re waiting in line for something, you fall into at least one of those categories. Embrace it. Then realize that the people standing in line next to you are probably just as interested in whatever you’re there for as you are. Strike up a conversation with them about how awesome Peter Capaldi has been as Dr. Who! Chatting with other fans helps pass the time and, in a clutch, there stands a good chance they’ll save your spot in line if you suddenly need to rush to the bathroom (I told you not to eat the convention food…). 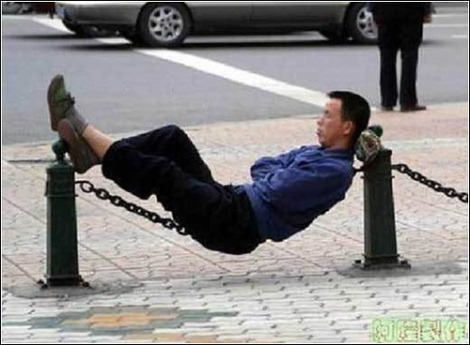 Comic Con is a hotbed of exhaustion and disease. We’re in the midst of the cold season right now here in San Diego, so sniffy noses and hacking coughs are going to be on the menu. The best way to fight off illness? By giving your body a chance to relax. And that won’t happen if you’re out on the floor at 8:30am and out partying until 1am every night of the convention. Unless hangovers and stinging eyes make the con experience complete for you, make sure not to neglect rest when your body calls for it.

My recommendation: No panels teasing your interest for the next few hours? Go back to your hotel and take a 20 minute powernap. Simple as that. Toss in a few vitamin supplements like Airborne or EmergenC, and your immune system will be ready for the onslaught of bodily fluids that has come to define the SDCC.

No joke. Nobody wants to sit on a toilet seat covered in piss. And squatting after having walked an upwards of 10 miles is out of the question. The maintenance folks can only clean so quickly. Your best bet is to take maybe 10 minutes exploring the convention center itself, walking down hallways that don’t seem to go anywhere, and keeping an eye out for secret restrooms.

My recommendation: The further you are from the floor of the con, the safer the toilets are going to be. There’s a pretty solid restroom at the tip of the north side of the convention center, right near where the employee entrance is. That’s probably where you’ll find me again this year. 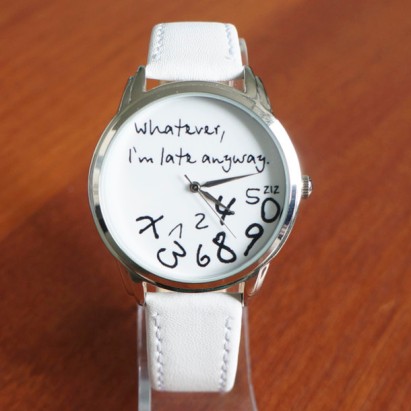 8. Make your panel schedule ahead of time

SDCC has a nifty app that, while overflowing with ads and being somewhat glitchy, helps you narrow down the insane amount of panels and presentations and signings and whatever else is going on. Nothing is more frustrating than wandering aimlessly down a hallway, only to see a sign for a cool panel that ended five minutes ago. Or, even worse, finding a cool panel and discovering that the line for it wraps around the building. Do you take your chances? Or do you pass on seeing Neil Gaiman’s newest scruffy-writer look?

My recommendation: Hop on that SDCC app (it’s available for Android and IOS), ignore the constant onslaught of ads, and, while you’re eating lunch or hanging out in your hotel room relaxing, skim through its listings for panels (et. all) that might interest you. That at least gives you a rough time frame and location.

9. Check out the community

One of the best things about having Comic Con in San Diego is that the entire city gets into it. Big time. The trolleys are decked out in decorative comic stickers, the lampposts all over the city are sporting Avengers logos, and even the languages of some restaurant menus and local transportation stations are changed to Dothraki or Klingon. It’s ridiculous and hilarious and always gets me into the entertainment spirit.

My recommendation: Explore San Diego while you’re here! Even if your hotel is in Downtown and you can’t make it out to places like Normal Heights or South Park or Ocean Beach, there’s tons of local eateries and galleries busting out the comic themed cups and arrangements and many of them even host comic themed parties and get-togethers. If you’re feeling a little burned out from all of the explosiveness within the convention center, head out into the streets and take a peek into the businesses around you. You might just find something special hidden away inside a pizzeria…

It’s an inevitable part of Comic Con that people get stressed. Frayed. Overwhelmed. This leads to rising tensions and, for some people, unquenchable rage. Arguments abound and, at some point, you’re destined to find a Darth Vader throwing down with a Captain Kirk in the lobby hallway. This is why I find it so important to stop rushing about, to close my eyes for just a moment, and to take a deep breath. Outside. I say outside because all the air in the convention center is recycled and is filled with breathy, rage infused toxins that would give Scarecrow a run for his money.

My recommendation: The ocean, in case you didn’t know, is literally on the other side of the convention center. Head out there when pushy crowds and crying babies begins to tear apart your sanity. Often, the Renaissance Players are hanging out on the west balcony, holding sword fighting tournaments for our viewing pleasure. Listen to their grunts of pain and take a deep breath. You’re in San Diego, the greatest goddamn city in America, surrounded by passionate people and wonderful weather. And, right there, just in front of you, that armored dude’s arm is getting bashed in.

If you’ve got some necessary survival tips, please feel free to ring out in the comments below!