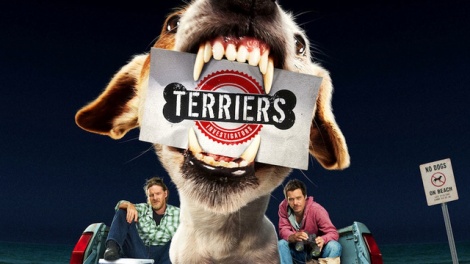 No one really watched Terriers, created by Ted Griffin in 2010, and I have no idea why. I recently watched it not knowing what to expect from the TV show, of course the name didn’t help to clarify. It is one of the best crime shows I have ever seen. It kept me laughing, crying, and in anticipation for what would happen next. I recently watched the entire show on Netflix, unfortunately FX cancelled it after only one season. Terriers follows two private investigators whose tragic pasts have brought them together. Hank, played by Donal Logue (Sons of Anarchy), was destroyed by the bottle, kicked off of the police force, and left by his wife. He saves his new partner Britt, played by Michael Raymond-James (Once Upon a Time), from a life a crime by starting an unlicensed private investigators business with him . They roam the streets of San Diego, where it was all filmed, doing odd jobs and taking down crime lords. The dynamic between Hank, the sarcastically witty brains, and Britt, the lovable sneaky thief, is what made me fall in love with this show. Their banter is well crafted and the story lines kept me hooked. Terriers is dramatic, brutal, funny, and exciting. It’s worth watching at least once, but it’s even better the second time around.

5 responses to “Terriers: A Crime Show That’s Not About Dogs”